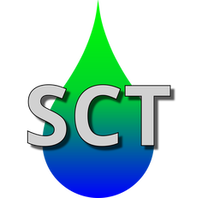 Stokes law is fundemental to understanding many wastewater processes. The law describes a small spherical particle moving through a viscous fluid - in our case water - with a small reynolds number. For our purposes the most useful form of the law is the following: 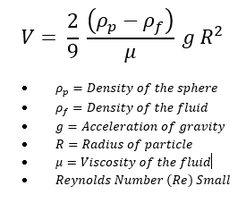 Stokes law is only applicable when the Reynolds number - an indication of turbulence - of the water is small. In our case we want a glassy lake at sunset rather than some class four rapids. This intuitively makes sense, particles suspended in the water are unlikely to settle in a predictable manner if it is turbulent. ​ 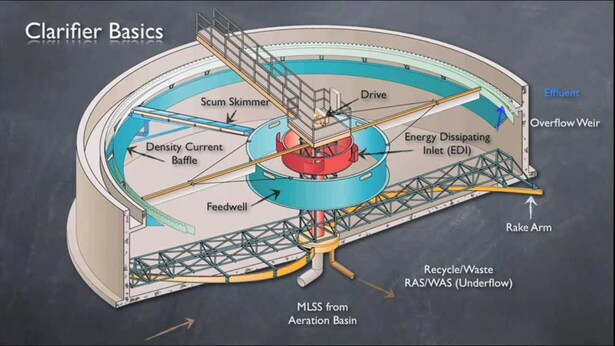 ​In wastewater equipment design a great deal of effort is made to ensure that turbulence is minimized. Clarifiers have energy dissipating inlets, density current baffles and feedwells; High rate DAFs and inclined plate clarifiers are designed to keep turbulence to a minimum between plates; and centrifuges operate with a low differential speed between the bowl and scroll.

Before separation can occur in a predictable manner a particle must be formed in the wastewater. Most industrial wastewater streams contain emulsified fats, oils and grease (FOG); collidal solids and/or dissolved solids. These mixtures do not obey stokes law and must be modified in order to form particles.

​A great deal of work goes into design chemical treatment schemes. In very basic terms - read gross oversimplification - the goal is to form particles and/or to neutralize the negative charges surrounding those particles that allow them to stay in suspension. These charges that keep the particles in suspension are very much like the way your hair on a dry winter day stands on end and defies gravity after removing your hat these particles will never settle. Once the charge has been neutralized the FOG and/or other solids will start to coagulate and form small particulate that will follow stokes law. 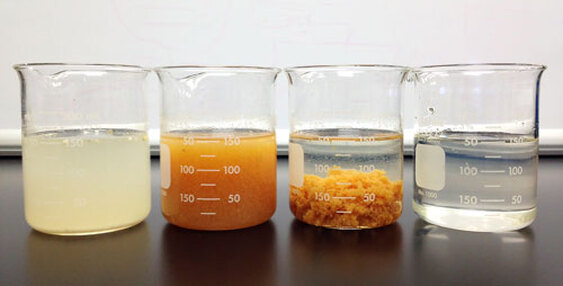 The particles that are formed during coagulation and precipitation are small and typically called microflocs. While these particles will obey stokes law, they have a very low terminal velocity would require enormous wastewater process equipment to achieve the desired clarification.

In order to keep process equipment costs and foot print requirements under control long chain polymers are added to the wastewater. These polymers typically have a many positively or negatively charged sites that can attach to the small particles formed through coagulation. As more and more particles attach themselves to the polymer large macroflocs are formed through bridging.
These macro flocs have a radius that is orders of magnitudes larger than what was initially generated during the coagulation process. A quick inspection of stokes law reveals that this increase in raidus will drastically increase the settling velocity of the particle which will ultimately result in a faster separation and more reasonably sized process equipment.

Despite our best efforts in selecting the right chemicals for coaulation and flocculation, not all particles readily sink. Wastewater that is high in FOG - commonly found in the food and beverage industry - is one of the worst offenders because it will form macroflocs that have a density that is very similar to the density of water. When this happens the terminal velocity as indicated by stokes law is very small again making the process equipment requirements un-economical.
In some cases there is also a desire to increase the density of the particles so that they settle faster. In most situations settling rates should be increased by improved coagulation or flocculation, there are some cases where that just isn't enough. In these instances weighting agents can be added to increase the particle density. The weighting agents come in many forms and names but typically they are composed of sand or iron that have a much higher density than water. As the macroflocs are formed in the wastewater process these agents can be added greatly increasing the density of the macrofloc and thus increasing the settling rate. This elevated settling rate allows for the equipment sizing to be far more aggressive resulting in a smaller footrpint or increased capacity.

You are probably thinking to yourself, there is no way to increase the gravitational acceleration constant without moving to another planet, and you would be correct; but sometimes desparate times call for desparate measures. In order to take advantage of this aspect of stokes law equipment is desinged to exert centrifugal forces that are far greater than what is experienced by gravity alone. Sometimes the forces are many thousand times stronger than the force of gravity.

To this exert additional force on the wastewater particles are usually spun at very high speeds using centrifuges or hydrocyclones. With both systems the heavier wastewater particles are forced to the outside of the rotating liquid and the clarified liquid accumulates towards the center. These high forces greatly increase the speed of liquid solid separation allowing the equipment to have incredibly small footprints. Unfortunately the energy requirements of centrifuges and hydrocyclones can be much higher than gravity based separation systems.

​*it should be noted that the validity of stokes law in these systems can be questioned but it still serves as a good guide for why these systems have been developed.*

It is pretty obvious that reducing the distance a particle at terminal velocity needs to settle or float will decrease the amount of time it will take to reach the solid surface. Unfortunately making the tank for the DAF or clarifier shorter doesn't work all that well becuase solids would quickly build up and causing a great deal of carryover in the clarified liquid and the solids will not have time to dewater and thicken leaving the operators with an large volume of sludge to handle.
​